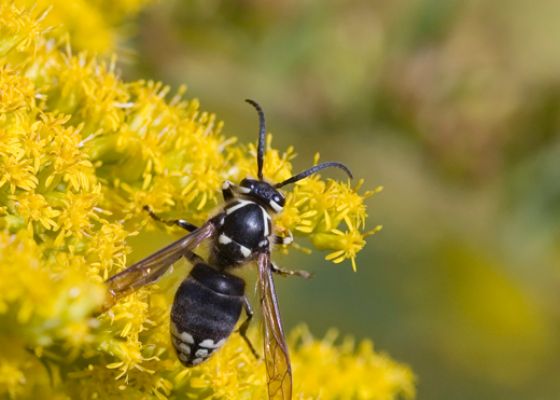 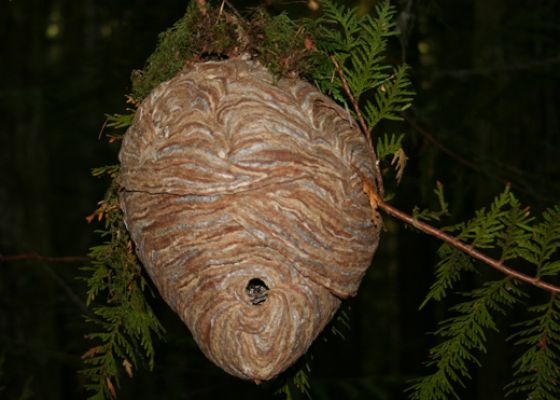 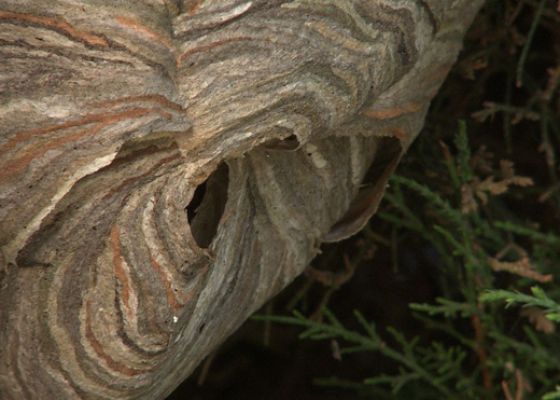 The bald-faced hornet isn’t a true hornet, but rather is closely related to the yellowjacket.

Bald-faced hornets are found on the western coast of the United States, the Rocky Mountains, and most of the eastern U.S.

Bald-faced hornets are common to meadows, wooded and urban areas. Bald-faced hornets build nests at least the size of a basketball, and sometimes larger. Nests are grayish and round or pear-shaped, typically in higher aerial locations 10-12 feet high, such as in trees, shrubs, or on buildings. Bald-faced Hornet nests are much stronger, flexible, and resistant to water damage than the nests of other species. The thick paper of the nest conceals two to six horizontally arranged combs. Bald-faced hornet nests often have leaves and twigs in the outer nest wall. Peak nest populations are 400 or more workers.

Bald-faced hornets typically only forage for live prey but occasionally will scavenge for sugars. This species primarily preys on flies and other yellowjackets for protein. Colonies last one year, with new queens overwintering to make new nests the following spring. Bald-faced hornets can be very aggressive when aggravated or when the nest is disturbed, presenting a significant stinging hazard. It is reported that they will go for the facial area when they attack humans.

Bald-faced hornets are named for their white face coloration. On the rest of their bodies, they are mostly black with white markings on the thorax and lower half of the abdomen. Compared to yellowjackets, they are quite large and plump, at 3/4 inch long.