What do Japanese Beetles do to your yard?

What do Japanese Beetles do to your yard?

In the Eastern and Upper Midwest regions of North America (and certain parts of Colorado and Oregon), July gives way to beetle mania... Japanese beetle mania, that is.

Japanese beetles are not native to North America, and they have no natural predators -- meaning they can treat your yard as a huge buffet with no natural consequences.

Here's why these pests are so despised: 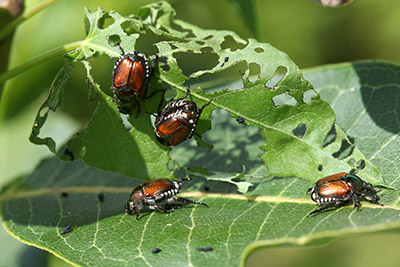 They eat your ornamental plants.

They emerge from the soil as adults, with a ravenous appetite for plants. Which plants? Let's just say they don't discriminate. Japanese beetles feed on over 300 varieties of ornamental plants. They especially like roses, beans, grapes and raspberries. They also prefer plants that get full sun.

Japanese beetles join forces to feed on plants in groups, making them easily visible. But even if you don't see them while they're getting their fill on the plants, their calling card is unmistakable: A "skeletonized" leaf, with only the veins remaining.

They destroy your lawn. 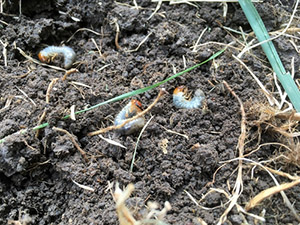 Even when they're out of sight, Japanese beetles cause damage. At the end of the 8-week mating and feeding season, the female beetles lay eggs in the grass.

Once the eggs hatch into grubs, the grass roots provide their food. This stage of development lasts from late summer to late spring, with the main feeding times being August to November, and April to the end of May.

As the Japanese beetle grubs devour the roots, brown patches of dead grass form in the lawn.

Stop them in the air. 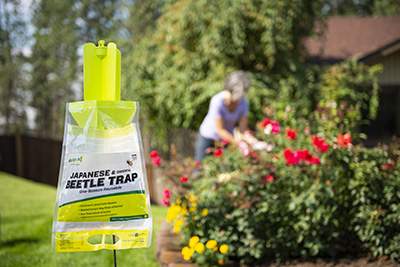 The best way to stop adult beetles when they're flying around looking for a smorgasbord is to use a Japanese Beetle Trap.

Set the trap away from the plants you want to protect -- at least 30 feet away, and four feet off the ground.

The floral and sex attractants in the RESCUE! Japanese Beetle Trap lure both male and female beetles to the trap.

Click here to find a retailer near you that carries the RESCUE! Japanese Beetle Trap.