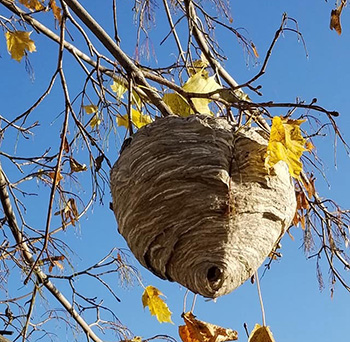 As leaves drop from the trees in autumn, sometimes their absence can reveal a previously-camouflaged surprise -- like a bald-faced hornet nest.

Bald-faced hornets are named for their ivory-white face coloration. (They are also sometimes called white-faced hornets.)

Bald-faced hornet nests often grow to basketball size or larger. Peak nest populations are 400 or more workers. The nests are covered with paper carton and have a single opening where the bald-faced hornet workers enter and exit. 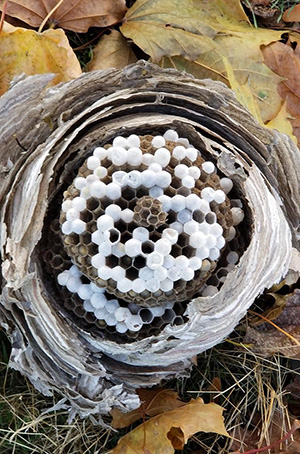 Bald-faced hornet nests are started by a single queen in the spring, once she emerges from hibernation. She collects wood fiber and chews it to produce a paper-like material to build the nest. As she constructs the inner cells, she lays an egg in each. The eggs mature into larvae, pupae, and then workers -- who forage for food and building materials to keep growing the nest until the season slows down in fall.

These photos are from Laura in Spokane, who reports finding this bald-faced hornet nest the size of a human head in her yard in late October.

Although it was past the point of being active with workers coming and going, the nest wasn't fully abandoned, as there were larvae inside some of the cells. "When it was down and being smashed and sprayed," she said, "a few were actually pretty squirmy. Ick!"

Even if you find a nest like this late in the year and leave it up, the good news is that the insects will not use it again. Instead, the overwintering bald-faced hornet queens will build a new nest in spring.

And to lessen the chance of that happening, you can use the W·H·Y® Trap for Wasps, Hornets & Yellowjackets in spring to catch the queens when they emerge from hibernation.

Where to buy the W·H·Y® Trap for Wasps, Hornets & Yellowjackets