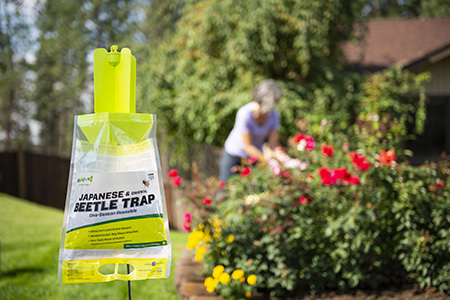 1. Trap placement is critical. Don’t place the traps next to ornamental plants. Set traps about 30 feet from tasty plants to lure the beetles away. It’s best to place them next to a non-flowering tree or shrub, such as a pine tree or boxwood, which is not attractive to the beetles. Four feet above the ground is the ideal height.

2. Enlist neighbors to battle the beetles with you. Traps are effective in one yard alone, but when neighbors band together and put out traps in their yards, the overall beetle numbers are greatly reduced. Consider it a “neighborhood watch” for Japanese beetles!

The RESCUE! Japanese Beetle Trap, backed by years of research, slowly releases a natural pheromone over the entire 8-week beetle season, while competitors’ traps start with a stronger plume and burn off quickly. 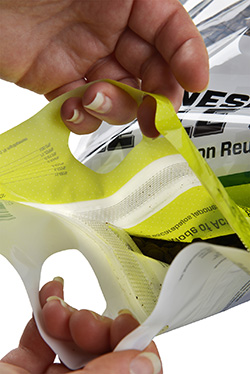 The RESCUE! trap’s easy-lock bottom allows beetles to be easily discarded if the bag fills up before the season is over.

Made of highly durable, double-layered nylon, the RESCUE! Japanese Beetle Trap bag withstands bad weather and the test of time. The all-in-one design, welded construction and capacity for holding a large number of beetles make it ideal for home gardens.

“Use the traps and you’ll be happy with them,” exclaims Dr. Klein. “Nine out of 10 homeowners who use a bag trap are satisfied with the results. Whether it’s because revenge is sweet or because they are actually seeing fewer beetles is irrelevant!”

The RESCUE! Japanese Beetle Trap is also the only trap to catch an additional pest: Oriental beetles. These shy relatives of the Japanese beetle damage the roots of turfgrass, fruit and ornamental plants, and they only fly at night – making hand-picking nearly impossible.

So there it is... myths busted. The facts prove the case for pheromone traps -- specifically the RESCUE! Japanese Beetle Trap!

Where to buy the RESCUE! Japanese Beetle Trap