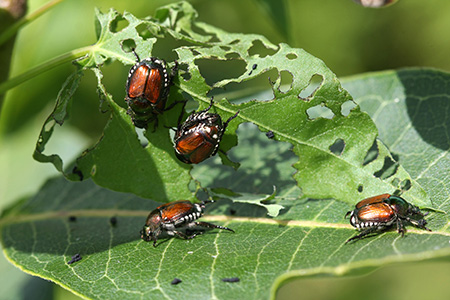 Japanese beetles have been one of the most troublesome backyard insect pests in the Eastern and Upper Midwest regions of the U.S. ever since 1916, when they hitched a ride on a container of ornamental plants from Japan.

Stopping these pests, which feed on and destroy nearly everything in a landscape, is vital to maintaining a healthy garden and protecting your investment.

While Japanese beetles are universally despised, opinions differ on the best way to battle them. Options range from pesticides to picking them off by hand.

However, according to expert Dr. Michael Klein, pheromone Japanese beetle traps are the most effective, environmentally friendly method of combating Japanese beetles.

And he should know. For 35 years, Dr. Klein was a research entomologist at the USDA's Agricultural Research Service lab, specializing in garden insects. Japanese beetles are his area of expertise. Over the years, he has used pheromone traps to protect the prized rose bushes and other plants in his own back yard.

Dr. Klein says the "conventional wisdom" about Japanese beetle traps is comprised of misconceptions, and he offers three “myth busters” to help gardeners win the battle against beetles: 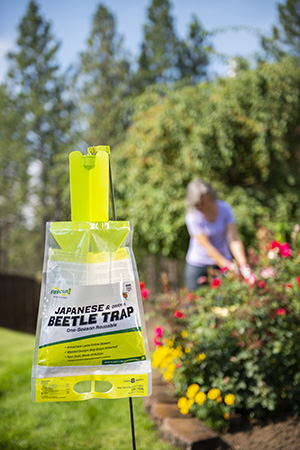 Wrong! The facts: Most attractants lure beetles from no more than 200 yards, says Dr. Klein. Japanese beetles, however, are strong fliers and travel several miles, touching down at random intervals to see what's available to eat. If a yard looks attractive, they will come in for a meal– unless a trap is set to intercept them. Japanese beetle traps only lure beetles that are already near the yard. One type of setting where traps could be an issue is around a golf course or large turf area, Dr. Klein says -- but not in the average yard.

Myth #2: Traps make the problem worse by luring more beetles than they catch.

Wrong! The facts: This is the biggest misconception in Japanese beetle history. The problem occurs when Japanese beetle traps are placed incorrectly. If placed next to a rose bush, Japanese beetles will be attracted to that area, and may land on the roses rather than in the trap.

Myth #3: Pesticides are safe to use on Japanese beetles.

Dr. Klein insists that "Pheromone traps provide a visible means of combating Japanese beetles without having a negative effect on the environment.”

Where to buy the RESCUE!  Japanese Beetle Trap